In thermodynamics, entropy is a state variable. It indicates how far a system has approached a state of equilibrium. The probable state in thermodynamic equilibrium is marked with the maximum entropy. The improbable state is marked by low entropy. The increase in entropy is considered an indicator of progressive environmental degradation. This is derived from the matter that is on Earth, which in turn is permanently fed by the energy of the Sun. Physically, matter is also a form of energy. 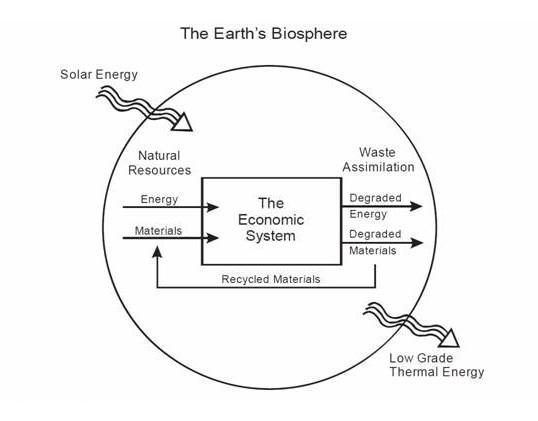 Any economic activity is inevitably associated with an increase in entropy. In every economic activity, only a part of the energy and resources stored in the inputs is converted into the desired input; the remaining part is irretrievably lost in the form of polluting emissions according to the entropy law. … To a limited extent, the environment has the ability to absorb pollutants and waste materials and process them in ecological cycles. If, however, the ecological disposal capacities are only exceeded for a short time, the accumulation of pollutants in the environment already occurs, which, depending on the quantities and qualities emitted, can lead to damage to the ecological system; in the long term even to the loss of its function of providing the economic system with raw materials and disposing of pollutants and waste materials.

Entropy increase therefore means – first of all in general terms:
– Loss of energy and matter in a high state of order and therefore economically usable and at the same time increase of waste heat and waste in the environment;
– with regard to natural systems: Use and often overuse of their absorptive and regenerative capacity, i.e. their impairment and in many cases their destruction.

In economic terms, this means that energy and materials can only be used if they are in a state of low entropy. Low entropy (or high syntropy) means for energy: concentrated (not distributed into the environment as ambient heat), of the highest possible temperature relative to ambient heat. For substances it means: as concentrated as possible and not, like gold in the sea, evenly distributed in tiny traces in the environment.

In other words, from an economic point of view: The fundamental value from which all other values are derived is low entropy or, expressed positively, syntropy. Just like life or any other form of self-organization, there is only movement or change where flowing from a high to a low state of syntropy is possible. The primary source of syntropy for the Earth is the Sun, which irradiates the planet with photons of high temperature; this energy can only be permanently used as a source of energy for life on Earth if the waste heat (entropy) generated during use does not accumulate on the Earth but can be radiated into cold space on the night side. All movement, all change on Earth is ultimately based on the functioning of this “photon mill”, as Werner Ebeling called the system Sun-Earth.

This is a new concept. Some things may still be missing, incorrect or yet to be implemented during this phase.